An Admirable HABIT of Leadership: Understanding the HUMANITY of Those You Serve

02/09/2022/Habitat for Humanity Yuba-Sutter/Comments Off on An Admirable HABIT of Leadership: Understanding the HUMANITY of Those You Serve

When Brian first moved into Harmony Village, a Habitat for Humanity HomeKey Project, he was concerned it would be much like other affordable housing communities he had lived in. Brian has a kind heart, an innocent demeanor and a learning disability that has left him feeling like a target in the low-income housing projects. It had been a long time since he had felt safe and he states that he feels at peace at Harmony Village knowing that crime can’t get out of control and that his neighbors are working toward a better future.

Growing up, Brian had a loving mother but an incredibly abusive father. Then, at eight years old, he woke one morning to find EMTs in his living room and his mother’s body on a gurney. Brian explains that his learning disability made it difficult for him to put the scene pieces together; his mother was gone.

Shortly after his mother’s passing, Brian went into Foster Care, until his father discovered he could collect money from his mother’s Social Security with custodial rights. Unfortunately, the funds received went straight to drugs, and with his mother gone, the abuse in the home intensified. The physical abuse endured is being medically addressed to this day and enlightens those in question on the need for low-income housing, with supportive services for many of our residents.

A few years ago, Brian discovered that the extended abuse had caused severe issues in his abdomen, after an episode where he collapsed during his shift as a security guard. He was going to require multiple, extensive surgeries with a long road to recovery. A recovery that required stable housing and supportive services.

Brian explained that because he had always been a nice guy, people he met would let him stay on their couches. He had only been literally homeless in high school, for a brief period of time between when his father kicked him out and when he was able to stay with an elderly couple, who sheltered him for 16 years. When the couple passed away, he relied on friends’ couches and even received help getting an apartment; however, he could not afford the high monthly rents on disability and felt unsafe in low-income housing.

Brian moved into Harmony Village on August 2, 2021. He has become a vital community member and has found a comfortable place to feel safe. He attends meetings held by Sutter County Health and Human Services and Harmony residents, is helping to form a pet committee, and even joined Habitat for Humanity Yuba/Sutter staff during the Marysville Christmas Parade to pass out candy to all the community (pictured).

If you ask Brian what he is the happiest about it, without a doubt, it would be Buddy. With the security of having his own place to call home, he could finally get a companion dog. Buddy may be one of the luckiest and loved little Chihuahua/mix pups we have ever seen. Brian takes pride in how he loves and cares for little Buddy, and the regular walks he said are helping to lose the last bit of weight needed for the 10-hour surgery required to repair the physical trauma of his childhood.

He said that his neighbors at Harmony have promised to walk Buddy, bring meals, or help in whatever way he needs, while Brian recovers from surgery. Brian was hoping to find online classes to take while he recovers but hasn’t found any designed for those with learning disabilities. He wants to do something that helps people, but knows he may not be employable again, based on his medical issues and learning disabilities

Brian also attended roundtable discussions hosted by Habitat and the Yuba-Sutter Chamber of Commerce for homeowners near the proposed HomeKey #2 project.  Brian was disheartened to hear what public perception was of himself and of his neighbors, but it inspired him to help create understanding to change it. He hopes to share his story and help the surrounding Yuba/Sutter Community understand why permanent-supportive, low-income housing like Harmony Village, made possible with HomeKey funding, is a solution to genuinely solving our homeless problem.

When asked what he enjoys the most about Harmony Village, as you can guess, Buddy was the first answer-but he had more to say: “This place is lovely. I can get real help now, and I have a home of my own. My IHSS worker comes a few times a week, and I don’t feel like I will die on a couch. I really like the staff and doing things in the community, like the parade…”

“This place is lovely. I can get real help now, and I have a home of my own. My IHHS worker comes a few times a week, and I don’t feel like I will die on a couch. I really like the staff and doing things in the community, like the parade…” “…I’m happy now. I have always been nice, but I haven’t always been happy.” 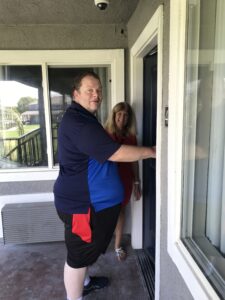 Thanks for subscribing! Please check your email for further instructions.

Something went wrong. Please check your entries and try again.
Scroll To Top